WRITTEN BY: FRED A. BERNSTEIN PHOTOS BY:MARK MAHANEY
ORIGINALLY PUBLISHED IN MODERN ACROSS AMERICA as BACK AT THE RANCH
RE-BLOGGED: Dwell
A new home at Sea Ranch, a half-century-old enclave of rugged modernist houses on the Northern California coast, captures the spirit of its surroundings. 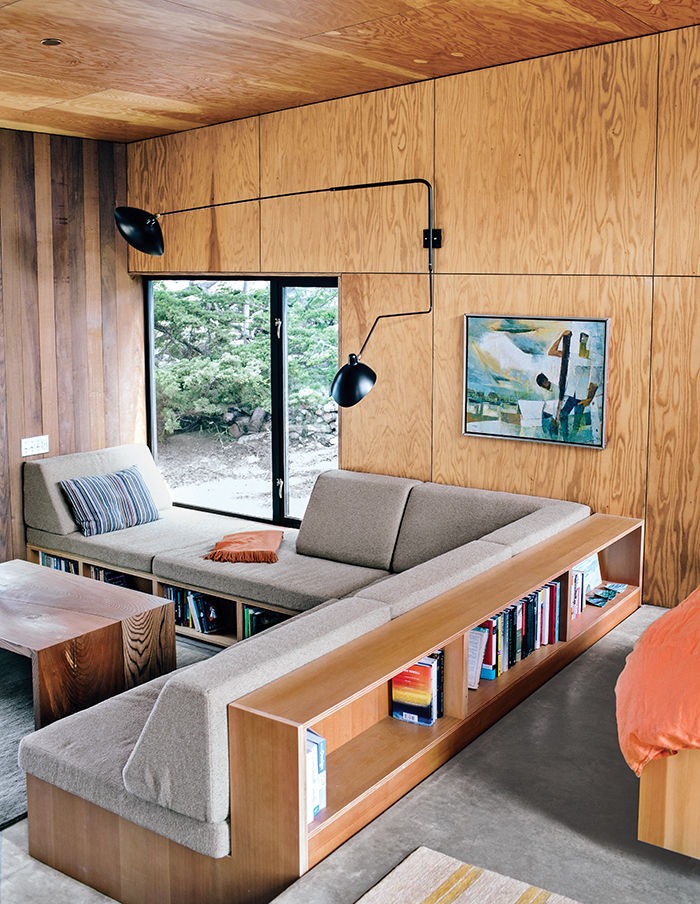 Fifty years ago, a group of young architects began planning a cluster of contemporary houses on a rugged strip of coastline north of San Francisco. The goal was to turn a ten-mile expanse of bluffs and beaches into a community where modest, rustic second homes would blend in with the landscape. Among the founding architects was Charles Moore, a future dean of the Yale School of Architecture whose own condo featured a bedroom raised on corner posts over the living and dining rooms, partaking of their light and views. Another was Joseph Esherick, whose famous Hedgerow Houses use occasional steps, two or three at a time, to scale the gently sloping sites.

Over the years, Sea Ranch has become a destination for architectural pilgrims, attracted by the pastoral modernism of its early buildings. But it’s also a thriving community that gains 30 or so houses each year. One of the newer structures, sheathed in rough concrete and Cor-Ten steel, takes the Sea Ranch principles to heart. As Donlyn Lyndon, one of the original Sea Ranch architects, says, “It is a real continuation of what we were trying to do.”

The view from Gabriel Ramirez’s property in Sea Ranch, California, where meadow grasses and cypress trees give way to craggy cliffs and the lapping Pacific Ocean. His house joins those that a cohort of forward-thinking architects built along this stretch of coast in the 1960s.

The owner is Gabriel Ramirez, a radiologist who lived for 20 years in a Richard Neutra house in Los Angeles and commuted to area hospitals. But now that technology lets him review scans remotely, he prefers to work in quiet, isolated Sea Ranch. After buying a site overlooking an inlet called Smuggler’s Cove, he asked two architects—Norman Millar, dean of the Woodbury School of Architecture, and Judith Sheine, head of the architecture department at the University of Oregon—to design the house. The architects had never worked together but had similar modernist credentials, and both are close friends of Ramirez, who didn’t want to have to choose between them. “We’re like a family,” says Millar, who adds that Ramirez made it clear that the architects would always be welcome in their creation.

Sea caves located beneath the property presented a problem: The house couldn’t occupy the center of the lot but rather had to hug its edges. By all accounts, that challenge proved beneficial by forcing the architectural duo to create two structures, a modest main house and a guesthouse, rather than one big one. This was fine by Ramirez and his partner, Sarah Mason Williams, a graphic designer. In true Sea Ranch fashion, they wanted the giant juniper at the center of their property to remain the site’s dominant feature.

For the couple, following the Sea Ranch rules—local covenants guide new designs—didn’t mean slipping into Sea Ranch clichés. Lovers of Cor-Ten steel, with its ruddy and almost organic surface, the architects made it the main exterior material, along with board-formed concrete and ipe wood. The Cor-Ten, which quickly turned an autumnal rust in the sea air, and the concrete, with its grain and crannies, mean the house isn’t a pristine box, Ramirez says. His Neutra house “was very crisp and clean,” he says. “This house is more distressed, more wabi-sabi.”

Cor-Ten steel and board-form concrete give the exterior a weathered look.

No wonder Sea Ranch stalwarts have embraced it. Lyndon—coauthor of The Sea Ranch, the definitive volume on the development and its architecture (a new edition was released in time for its 50th anniversary in 2014)—says, “It doesn’t look like other Sea Ranch houses on the surface, but it’s deeply rooted in the place.”

Indeed, the interiors recall both Moore’s loft, with its raised bedroom, and Esherick’s houses, with their stepped interiors. In Ramirez’s version, the living room, dining area, and kitchen are closest to the bluff. A few steps lead up to a guest room and study, and a few more lead to the master bedroom. The only enclosed rooms are the bathrooms, which project out in ipe boxes from one side of the house, and Ramirez’s office, tucked away below the master bedroom. The spaces flow into each other under an angled ceiling made of richly hued plywood—which, Sheine says, makes the interiors “warm, warm, warm.” On the sidewalls, everything above the datum line is covered in the same plywood; everything below is concrete, with grooves and pits that seem appropriate to the rugged surroundings. No part of the house is drywall, which Sheine describes as a kind of crutch—the material of last resort.

To avoid interrupting the long, sloped ceiling, Sheine and Millar decided there would be no lights mounted in it or on it. Instead, swing-arm fixtures—two by Serge Mouille, the others by David Weeks—are mounted on the walls. And when he serves dinner at night, Ramirez lights a pair of hurricane lamps on the large, black walnut dining table. As for the rest of his furniture, Ramirez relied as much as possible on built-ins, including a thickly upholstered bench that runs the length of the living room and is a perfect place to stretch out with one of his many architecture books. Though he may be working remotely, “in the end,” Ramirez says, “Sea Ranch is all about relaxing.”

Norman Millar and Judith Sheine designed the built-ins in the living-dining area, which were made from vertical-grain Douglas fir. Vintage Dutch industrial chairs are arranged around a black walnut dining table that, like the madrone coffee table, is by Urban Hardwoods.