Subverting the traditional, conservatively cozy British barn conversion, Carl Turner created a getaway in rural Norfolk for himself and his friends to visit, repose, and consider the beauty of agrarian minimalism.

A revamp of this small suburban Massachusetts home doubled its size while giving the yard, the neighbors, and the planet a little breathing room.
December 29, 2011
<
>
PROJECT
Ochre Barn
ARCHITECT
Carl Turner Architects 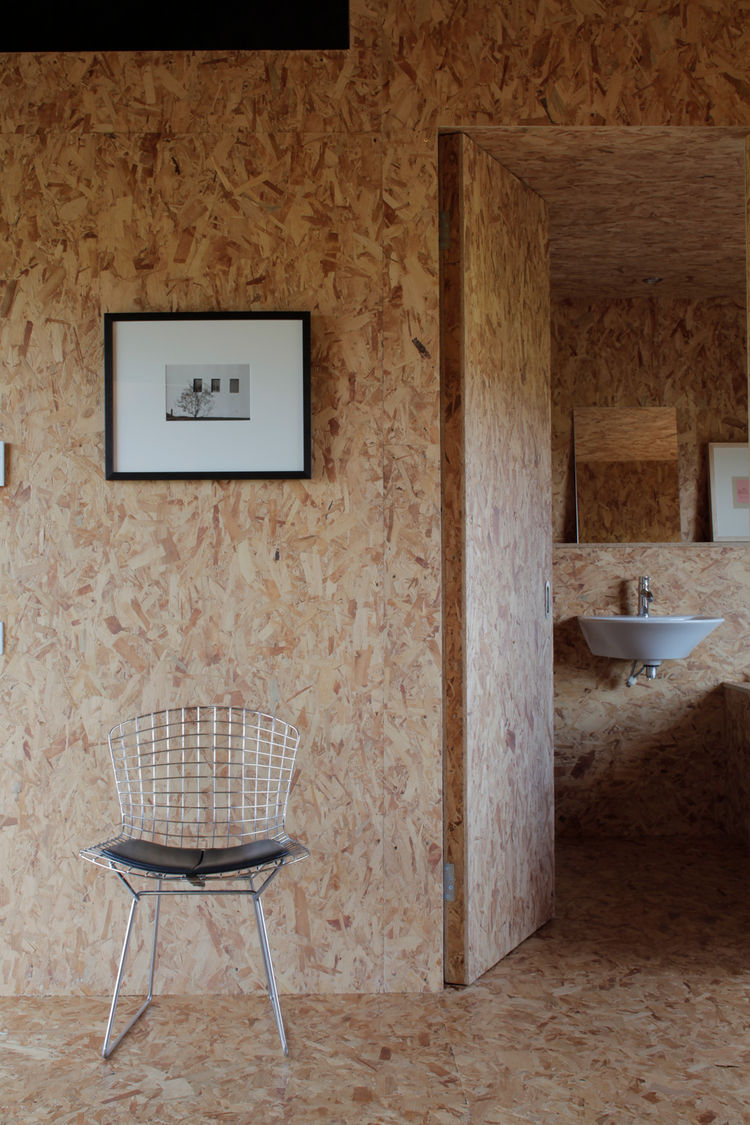 Walking through the door of Ochre Barn, it is impossible to avoid an almost cartoonlike intake of breath. The sheer scale of Carl Turner and Mary Martin’s former agricultural building is certainly a surprise, but it’s the use of materials that provokes the most reaction among visitors. Everywhere you look in the 5,000-square-foot 1850s threshing barn, you can see oriented strand board (OSB), a medium associated more with shuttering around large construction sites than with interior decor.

“We had seen straw bales in here and we started thinking about OSB,” says Turner, who heads up Carl Turner Architects in London. “The idea of using that as a predominant material gave us the idea that everything should be a bit more blocky. We both like Donald Judd and Richard Serra.”

By reversing his original OSB cabinet design, which opens onto the kitchen, Turner was able to build vast storage areas for food and crockery. You may have to nip around back to find the Cheerios, but all you see from the rest of the space is a wall of OSB.

The OSB is used to break up the vast space and create distinct areas: It fences in a sofa; forms seating; makes up a central freestanding bathroom and office pod; and delineates cabinets, cupboards, and bookshelves made by Turner himself. By using this rough-hewn material as a kind of muse, Turner has created a stunning rural getaway for himself, Martin, and their host of friends, wringing a winning live/work space from a pastoral ruin.

Ochre Barn sits in the largely rural county of Norfolk in the east of England, 90 minutes out of London by train. This is where Britain hides its flat, wide-open spaces, and the barn sits at the center of what was once the heart of local flour production. The Victorian structure still stands amid fields of wheat, but it has long since ceased being used for hulling the crop, which is how Turner and Martin picked up the property for $280,000 in late 2005.

A small clutch of farm buildings sit near Ochre Barn, but one of them, a small, multipurpose guest cottage dubbed the Stealth Barn was designed and built by Turner as Ochre’s modernist little brother. Erected on the foundation of a crumbling old outbuilding, the 800-square-foot space plays contemporary counterpoint to the harmony Ochre Barn has achieved with the landscape. Turner and Martin are serial renovators, but the protracted timeline of this “weekend project” meant plenty of hard work and mounting costs. “We haven’t been on holiday for six years,” says Turner. “A couple of years ago we were working on it on Christmas Day, we had run out of money, and we were busy with our jobs.”

Made from pressed tree chippings and resin, oriented strand board is strong and durable and makes a bold design statement. The sheer level of agricultural chic at the Ochre Barn is probably a bit much for most interiors, but the material did come cheap: Turner bought eight-by-four-foot panels of OSB for as little as $24 apiece.

The renovation cost them $550,000, or at least that is when they stopped counting. But they stuck to their design principles and their vision of a holiday retreat, rather than switching course midstream in hopes of selling a simple, traditional conversion at a profit.

Some of the most impressive renovation work involved strengthening the ceiling and its elaborate architectural rigging and shoring up the old brick walls. Yet it’s the clean rusticity of the interior, not the exposed structural engineering, that carries the day aesthetically.

Martin cites a monastery as her ideal living space, and the barn certainly has the air of a secular place of peace and retreat, though it promptly comes to life when friends visit. The simple long table and benches opposite the kitchen suggest the communal spirit of an order of country friars, but as soon as 20 people are seated around it enjoying dinner and wine any vow of silence is out the window.

Ultimately it’s the barn itself that guided Turner and Martin, organizing everything from the vast, open public space to the form of the Stealth Barn to the OSB that gives the interior so much of its humble charm. “We have not interfered with the structure; we just inhabit it,” says Martin reflectively. “If you want a house then buy a house. This place had a history long before we were here so you have to listen to the barn and appreciate it.”

Sitting next to Ochre Barn, this 800-square-foot black structure looks, from a distance, like it could be a tool shed or animal feed store. That is at least partially the idea. It’s only when you approach that the geometric structure reminds you of the shingle cottage where artist Derek Jarman made his home or the fisherman-hut-inspired work of the Glaswegian architecture firm NORD.

“It only cost about $48,000 to build, which was incredibly cheap,” says Turner of the Stealth Barn. “We got the Timber Frame Company to supply the shell, then we clad it and fitted out the interior and windows ourselves. The idea was to take the archetypal black tar-painted agricultural building and make an almost childlike icon of that.”

Turner, however, saw this part of the renovation as another chance to experiment. He sited the small barn on the foundation of a derelict outbuilding and imagined the space as a kind of blank canvas: ideal as a simple guest room, a studio, or even a rental.

“It only cost about $48,000 to build, which was incredibly cheap,” says Turner. “We got the Timber Frame Company to supply the shell, then we clad it and fitted out the interior and windows ourselves. The idea was to take the archetypal black tar-painted agricultural building and make an almost childlike icon of that. We called it the Stealth Barn as it is slightly unsettling, like it is there and not there.”

If you’re interested in working with Oriented Strand Board (OSB) have a look at our range by clicking here or give us a call!